Dorset Council is reviewing the arrangements for town and parish councils in this area.  The review can consider one or more of the following options:

Full details of the review process can be found at https://www.dorsetcouncil.gov.uk/w/community-governance-review.

Bridport Town Council wants One Council For Bridport, replacing four that currently cover the built-up area of the town.  The main points are:

At the bottom of this page is a map showing how the proposed boundary might look.

There are lots of good reasons for this change – including better local services, a stronger local identity, greater democracy, and Council Tax fairness.  These are explained further below, or you can read the following that provide detailed explanations:

We published our initial proposals in September and considered them at a public Full Council meeting.  Since then have leafleted every household in Bridport parish, held a public stall in the town centre, addressed local organisations, and spoken to lots of individual residents.  We’ve listened to feedback and have incorporated this into our final submission document.

Why One Council For Bridport? 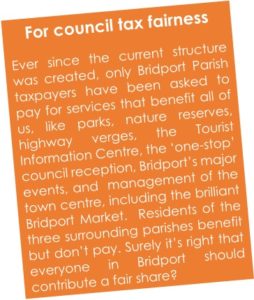 For council tax fairness.  Ever since the current town and parishes structure was created, only Bridport Parish taxpayers have been asked to pay for services that benefit all of us, like parks, nature reserves, highway verges, the Tourist Information Centre, the ‘one-stop’ council reception, Bridport’s major events, and management of the town centre, including the brilliant Bridport Market. Residents of the three surrounding parishes benefit but don’t pay. Our proposals would mean people in the three surrounding parishes paying a more than they do at the moment, while residents of the existing Bridport parish would see a reduction in their Council Tax.  Surely it’s right that everyone in Bridport should contribute a fair share? For better services.  One council for the built-up area of Bridport can do more for the same money that residents pay to the four councils at the moment. One council would also be able to do more to tackle big issues like the climate emergency. The current system means duplicated overheads and a fragmented approach to services and policies. And we know that Dorset Council wants local areas to take on more services, or risk losing those services. Of the four councils, only the Town Council has the track record, powers and resources to do this. For a stronger local identity.  The vast majority of people in the built-up area of Bridport think of themselves as being from Bridport, even if they also identify as being from a particular part of the town. We won’t lose that very local identity, but by coming together as ‘one Bridport’ rather than four parishes, we’ll have a louder community voice to influence the bigger authorities like Dorset Council and the Government. For greater democracy.  At the last elections in 2019, none of the parish councils had elections and so their councillors were appointed unopposed and without voters having a say. The Town Council election saw 35 candidates standing for 18 seats so people had a choice. With 20 councillors on the new council, we’d expect this to be the same at the next election in 2024. This means that for the first time in many years, everyone in Bridport will be able to elect the councillor for their area.